These are both what I've heard called speedrun levels, levels which purposely put you under heavy time pressure.  Both of them would not be very difficult if it weren't for that.  Give them a shot, why not?  Even if you don't make it, at least you won't have spent much time on them.  I can't say the same for myself.  I spent several hours of time playing, testing, fixing, adjusting and proving each level.  I hope you enjoy them! 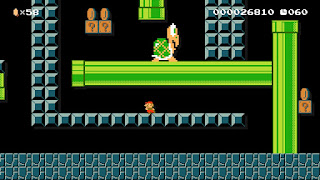 This is one of my best levels I think.  It's a very long course; you'll end up running the maximum length of the map four times by the end.  It's full of situations that are meant to be taken at a full run, but then gives you situations that you shouldn't run through, like the above-pictured sequence where you have to use a giant Koopa to smash through a hard wall.

It's not an easy course, but I think everyone can finish it eventually.  My personal best record is finishing with 19 seconds left, but there's a commenter who's managed to finish with over a half minute remaining. 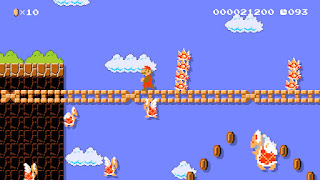 This was originally envisioned as a sequel to Three-Minute Mile (hence why you only have two minutes to finish it), but it has an entirely different character.  It's even longer, and you get less time, so how are you supposed to complete it?  Through the use of that wonderful invention, the fast conveyor belt, which most of the stage is made out of.

Because of those belts, you have very little time to react to most threats, so the course makes a lot of use of coins to suggest ways to go.  They're best treated as suggestions, though towards the end they're very important suggestions..

This course is harder than Three-Minute Mile.  Not only are there more things that can directly kill Mario, but even a successful run isn't going to have much time left.  Yet, in the less than 24 hours since I uploaded the course, one person at least has already finished it out of three players, and after just 15 lives between all of them, so maybe it's fairer than I thought.  A word of advice: if you get near the end, there is a long, long jump over the only pit in the level.  You're actually slightly better off not making this a perfect jump; you want to jump about one block before the end of the belt, which is like split-second timing.  That will bounce you to potentially a faster route for the final segment.

I discovered an interesting bug in Mario Maker in building this level.  The level makes good use of "in the field" powerups, which are just laying around to be collected, as opposed to coming out of blocks or other spawners.  For the last third of the course, however, I discovered that these powerups were no longer appearing!  It made the last segment rather harder than it should have been, so I added several blasters that fire Mushrooms.  I'm particularly annoyed that a certain Flower doesn't appear, and that a clever bit I had worked up where the game hands you a random Mystery Mushroom just before the flagpole doesn't work.  I have tried to compensate, but the powerups that should spawn remain in the level, in case Nintendo fixes this someday.  If you download the level and try those last sections in playtest mode, you'll see them in play.  They only fail to appear, it seems, if the player has seen a lot of object spawning before them.