"P" Is For Practice

I've made a lot of levels lately, and there are plenty I haven't posted here yet.  I'm going to try to confine myself to one level per post though, and one post a day.  Today's level is-- 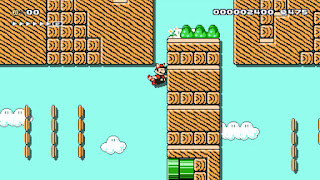 Not all of us has had the privilege of extensive play of the earlier Mario games, despite the fact that Virtual Console means they are not hard to come by.  Even if you haven't played them, some of the finer parts of Mario's handling in individual games may be a bit obscure to people.

One of the more esoteric aspects to Super Mario Bros. 3 is the mysterious P-Meter, a bar that fills up as Mario runs, and drains when he doesn't.  With it fills, a fluttering noises plays, signifying that if he has a Super Leaf he can fly using his (rather whimsical) raccoon tail as a propeller.  The bar fills and the fluttering plays even if he doesn't have a tail, which can be rather confusing.  While Super Mario World's Cape Feather uses a similar charge-up mechanic, the fluttering and the P-Meter both went away.

The interesting thing about making the charge explicit is that it reveals exactly under what circumstances Mario gains and loses charge.  While most people suppose you have to have a long enough straight runway to build up steam for flight, because the bar doesn't drain instantly upon stopping or slowing, by running back and forth, with the occasional timely hop or even slam into a wall, you can build up power without a straight run.

The purpose of this course is to provide practice for building P-Meter charge.  Five trial situations are presented and then a final test that uses elements of the trials.  Here are some tips: