No Shelter From The Goomba Rain 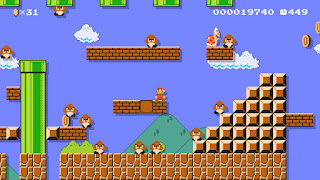 NSFTGR was my second ever Mario Maker creation, and even now 17 levels later it's still my favorite.  This despite the fact that many people look at it and think, certainly, this is unfair.  And just look at its death chart!

But this is the kind of level that needs a low clear rate.  I tell you, it is far from impossible.  I can now complete it better than 25% of the time, indeed I'm getting to where I can beat it half the time, despite the fact that it is infuriatingly, gloriously random.  Indeed, randomness is the entire point of this level.  I've called it something like a roguelike Mario Maker level before.  That's probably going a bit too far honestly, but still, it is proof that randomness and difficulty can make for a good Mario level design.

One of my favorite things about Mario's ruleset is that it's full of subtlety.  Goombas don't just march forward, but if the encounter another enemy, will turn around and go the other way.  There are actually not a lot of platform game enemies that will do that!  As a result, a pipe that steadily adds Goombas to a room won't cause them to clump periodically, but instead they'll tend to spread out evenly, into a solid floor of goom.  NSFTGR includes Goomba drains in most of its basins precisely to stop that from happening, because a solid floor of Goombas can be handled just by bouncing off their heads one after another.

The key to finishing the level is to get the powerups when you need them (I left a coin on top of blocks that contain one!), especially the Star early on, and to keep moving.  If you dally you'll get swamped beneaath a hilariously scowling horde, but dallying is what you have to do if you need a powerup.  I put a lot of thought into deciding on the right placement of platforms to slow the player down generally, but still allow him to get a good run going if he's good at hopping through gaps.  But also note, it's a lot easier to keep up speed without a powerup; Small Mario's height is a tremendous asset here, although it comes at the cost of great fragility.  This is a level in which a Mystery Mushroom would probably be overpowered.

Levels should be designed with a clear purpose in mind, some primary aspect that informs its structure.  Here it is overcoming an army of chaotically-dropping weak enemies.  There is a pit before the exit, but I put a shelf in near the end to help save players who jump out of the fray and overshoot the final staircase.  If I redesigned the level now, I'd probably extend it and make it impossible to fall out of the level there.  If the player has managed to swim through Goomba Valhalla, dying to a pit feels like getting cheated.

I am working on a sequel, that uses off-screen Lakitus to do the Goomba dropping.  They're a lot "clumpier" in their deposits than the pipes here.  I'm still working on the perfect arrangement of platforms and the best density of goom;  it's probably a little too clogged with enemies in the version I'm working on right now.  Yes, that's possible.

I mentioned that I can now beat NSFTGR around half the time now.  I'm starting to wonder if maybe it's a little too easy.  That Star, especially, if you get a good run going with it, can obviate a whole half of the level.  Maybe if I took it out and put another Flower in somewhere else?  Ah, but these decisions are what level design is all about, and there is no end to the overthinking you can do.  I'd say it is a game to itself, but really, isn't that the entire point of the game called Super Mario Maker?
Posted by Rodneylives at 10:48 PM