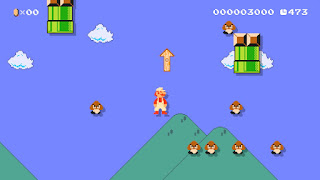 So it turns out there's a glitch that makes it possible to turn ordinary blocks invisible, or give some kinds of blocks the appearance of other kinds of blocks.  This level is a demonstration of the effect.

This isn't the first discovered glitch in Super Mario Maker.  There's an infamous glitch involving doors and spikes that can make Mario completely invulnerable to attack, and another one that lets him jump extra high off a springboard and possibly even teleport through blocks in the process (that one requires the Super Mario World style and also that Mario either be carrying something or riding Yoshi).

I consider both of those glitches to be pretty scummy and not a good thing to require to clear your course, or use to pass the Clear Test.  But I am more kindly disposed to this glitch.  Why?  A bug that let people create hell levels that others would have a slim chance of finishing would be a bad thing, right?

My view is it's not, really, because even without the bug, people were doing that anyway.  Expert mode in 100 Mario Challenge (selected, I think, from levels with a 15% or less clear rate) is basically more than half hugely difficult levels right now; to have any chance of finishing it with your 100 lives you have to lean pretty hard on the skip button.  For the person who thinks that somehow kaizo levels are good game design, this trick is just one more rubber phallus in the toolbox of dickery.

But for the person who can make use of it legitimately, it is quite a resource!  The level I constructed here is very short, but I think makes use of it well.  For one thing, the void below is actually completely sealed off: there is no way to fall out of the level, it's entirely covered over with invisible blocks.  And I give the player fireballs at the start, allowing him to use them to "feel out" the level.  To give it some slight bit of challenge a few Goombas are wandering around, and it's possible to get stuck in one area that might be hard to get out of.  But truthfully, getting out of it is not very hard.

Will I make other levels that use invisible blocks?  Well, it's really a pain to make effective use of them!  Making the first one requires messing around with tracks, doesn't always seem to work, and once one is made you have to copy from out of multi-select mode to make more, and even that sometimes fails to work.  And weirdly, copies of the original don't always seem to work as intended.  And when working with them, sometimes in the editor they will show up randomly like the real block type, especially when they're scrolled in from off-screen.  And to work right in the player, you have to be sure to save or upload immediately after a play, so they will all render correctly while in their invisible state.  In short, working with them feels glitchy, which means Nintendo will almost certainly patch this out.

But it also makes working with them feel like magic, like having to follow a special ritual to make this thing that doesn't obey proper physics.  And that's pretty cool!
Posted by Rodneylives at 2:38 AM