Some more levels, some upcoming things

Been a few days since there's been a post here.  I'm still making levels though, I just uploaded my 24th, so I'll contribute a couple of my recent efforts to the blog, and add some further notes: 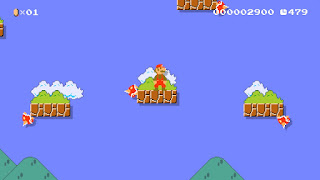 Did you know that, to save ROM space in the original Super Mario Bros., they reused the graphics for clouds for bushes, just recolored?  And that this graphical quirk persists into Super Mario Maker, where you can't manually place clouds, but you can so place bushes with a little thought?

I think that, while it's easy to do level design badly, there are far more good kinds of levels out there than most people even dream of.  And so I embarked on this: a level whose entire gimmick is that there's a platform (with a bush on it) every place where there's a cloud in the background, adding enemies in order to provide a bit of challenge, and powerups to help the player out a bit.

And I think the level works pretty well!  It's probably a bit too long (it's maximum length), and there's a winged Hammer Bros. by the flagpole that, while able to be bypassed with some searching, is probably still overkill.  (By the way, winged Hammer Bros. are more predictable, and therefore easier, than normal ones in the SMB style.)  It plays rather like a (much) simpler version of my earlier, whimsically-named A Bunch Of Cubes On Sticks (D618-0000-008E-7DA8). 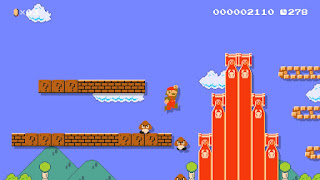 A lot of players and makers alike look down on Goombas, but really they're exactly as deadly as Bowser himself, in that, if Mario gets hit by one, he dies.  In this level the Goombas are fed up with their reputation for weakness and so, inspired by the rabble-rousing Goomba military genius General Goom, they have set up a series of elaborate deathtraps for Mario.

Of course one of the charming aspects of Goombas is that their ferocity is far from equal to their adorable scowl, and none of the tricks used here are anywhere close to Kaizo territory.  Still, Goom's treacherous obstacle course will keep you from the flagpole longer than you might suspect.  The old veteran's especially fond of sudden attacks from the sky.

To set aside the goofy narrative, the theme to this level is that every enemy is either a Goomba, or, to give it some variety, is being ridden by a Goomba.

A major update to Super Mario Maker has been announced, offering an expanded version of the Gnat Attack minigame, and official courses and courses made by Nintendo partners....

Oh, and also checkpoints!  And progressive powerups like in all the other 2D Mario games!  Two of the most requested features from makers are coming on November 4th!

Checkpoints are, simply put, "midway points" that, if Mario gets to one, allow him to continue from there instead of going all the way back to the beginning on his next life.  They also throw in a free Mushroom when used.  And you can set up to two per level!  The only catch is, if you use Checkpoints, you must pass additional Clear Tests upon uploading, starting from each point, to make sure the player can't get stuck by a checkpoint at the bottom of an inescapable pit.

Progressive powerups mean that you can set a high-level powerup (Flower, Leaf, Feather, Propeller) so that, if the player isn't Super when he encounters it, it will instead be a Mushroom.  It might sound like a minor thing, but its lack has been like my biggest complaint about the game, for reasons that I plan on elaborating upon soon.  Speaking of which....

Plenty of people have been talking about the requirements of good course design.  Don't let the player get into inescapable situations, don't punish exploration, don't use leaps of faith, don't make instant deathtraps, and so on.

But, what about great course design?  What makes Nintendo's levels so good, for instance?  What should a course editor aspire to?  And because I am practically filled to bursting with good old-fashioned hubris, I have undertaken to write an essay expounding on the qualities of greatness in the best Mario levels, and dare I say it, level design in general.

It's about half written at the moment, which means of course that I might finish it tomorrow or it might not ever see publication.  And when/if it gets finished, I'm not sure where it'll go.  But if it does see the internet in some form, I'll be sure to link to it from here.

That's enough from me for the moment.  I still have a ton of levels I haven't posted!  I'll probably put them up here, maybe a the rate of one every few days.  I hope everyone reading this is still enjoying Mario Maker!  I keep coming up with weird ideas for more courses.  Anyway, back to work!
Posted by Rodneylives at 1:06 AM