I have now uploaded 29 levels, just one shy of my current upload limit.  My star count is just 25 away from the next medal though so I'll probably just slow down a bit and let stars accumulate for now.  In the meantime, allow me to introduce my latest three courses: 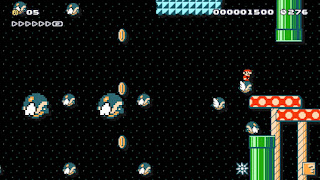 A good pick for the hardest level in Super Mario Bros. 3 would be 5-6, or "that damn Parabeetle level."  It's the only level in Mario 3 to use that enemy.  Why they decided it had to be in Mario Maker on the basis of one use I'm not sure, but it's certainly interesting.

Parabeetles don't "stomp" when jumped on, but instead bear Mario's weight and carry him along.  More than that, the creature takes that as a signal to start flapping harder, and begins to soar up into the sky, whether you want it to or not.

This course is my homage to that level.  Naturally it has to use the Mario 3 game rules, even though I usually stick with Super Mario Bros style unless something about the level's gimmick demands otherwise.  I offer the following advice, which will make this course much easier: if you jump in place on a Parabeetle regularly, you can not only prevent it from ascending, but even cause it to slightly decrease in height.  With that knowledge, you may have a chance. 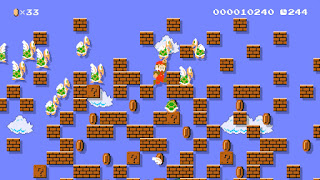 I have a soft spot for Green Parakoopas.  Although they have wings, they just can't quite get the hang of that flying thing, and are stuck with great flapping bounces along the ground.  Unchained Chomps (seen previously in Time For Walkies) work similarly, but faster, not bouncing as high, and ordinarily invulnerable.  All of these things make Green Parakoopas more interesting, plus when you stomp one twice it leaves a shell, which of course has its own implications.

There are actually no explicitly placed Parakoopas in this level, though.  All the enemies are delivered via Lakitus floating high up off the screen.  As the level continues, more Lakitus show up, and eventually the turtle rain becomes a torrent.  You can still make it though though, by collecting powerups and making use of what shelter you can find.  It's kind of like No Shelter From The Goomba Rain in that regard, but much more random.  The presence of a mid-level checkpoint makes this course much easier.  Not only does it let you pick up from halfway through if you lose a life, but the earlier Lakitus won't be throwing turtles at you, so the green flapping hailstorm will be less severe in that case.

One more note that might help you out: Costume Mario cannot wear a shell helmet. 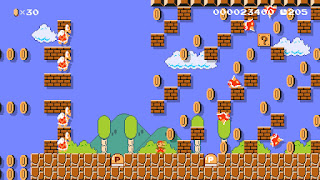 Ah, I finally returned to the Chaos Theory concept.  In fact, a lot of my levels make use of chaos in one way or another.  That's chaos in the mathematical sense, where small differences in state can have great effects on the world.  Here, those differences in state are those of P-Switches.

Many levels put P-Switches someplace where you have to work to get them, and then they change the world in some way that makes it possible to proceed.  Not this one, no sir.  P-Switches are placed often and in easy reach, but you don't have to hit any of them.  But neither is this a course where you're trying, necessarily, to avoid them.

What P-Switches do here is change things up.  Hitting a P-Switch will manipulate the world so that some challenges disappear, but others reveal themselves.  The course is not any harder, generally, one way or another, but it is different, and in a variety of ways.  Not all of these changes are immediately obvious, either.  In other words, depending on whether you have switches active at different times, you'll face different challenges.  I can say, however, that the moment when the P-Switch effect begins or ends is a little more dangerous, so be careful when a switch is about to expire.

Another interesting thing about this level is it has a special hidden route for people who are lucky enough to find an early Weird Mushroom.  Although I think it might be possible for the route to be reached without one.  See if you can reach it!
Posted by Rodneylives at 2:27 AM