Running in a Winter Wonderland

One of my more difficult ones, apparently, inspired by NSMBU's "Run for It!" and created for the Chopped Challenge Week 4. It's a speedrun level, obviously, in that you've gotta keep up to keep the P-Switches active to keep alive.

And as of this writing its clear-rate is just under 1%. I might have made this one harder than I meant to.

I finally got me a switch and some Mario Maker and I'm getting back into the swing of things.

Here are my first two attempts in MM2, both pretty easy, aiming for fun and exploration over anything else.

Hello all, I've been meaning to post my courses here but haven't had as much free time to play or make lately as I'd like. If I'm making any mistakes in this post, I'll be happy to correct them.

I've only got 6 uploaded so far, but my first few were obviously a bit rough. I had some neat ideas in them, but overall they were a bit too hard. In one case there were red coin puzzles, which seem very unpopular for good reason. These three are my most successful levels so far:

"That belong in a museum!" 12G-16K-QHF
It's a short level, Indiana Jones themed. You infiltrate the temple/cave and retrieve the treasure, which sets off a chasing boulder and various other traps throughout.

"Shoeflyin' don't bother me." N7J-H06-N8G
I've always loved the Goomba Shoe from SMB3. It was such a goofy thing, seeing a little Goomba hopping around in a weird green boot with little grubby cartoon hands. This game has a version of the shoe that gets a little hover jump, almost like a Yoshi's story type flutter. I wanted to make a level that could be beaten quickly, had no deadly enemies or bottomless pits. Basically I wanted a level where you couldn't die, got to jump n' fly, and even somebody who never uses the run button can beat it. 40% completion rate is certainly markedly higher than my other levels and I'm not sure how I could really even make it safer than it already is.

"Lucid Nightmare" - 7GX-GBM-SHG
The gimmick is the both level and sublevel are the same, but one is low gravity and the other is normal. Certain blocks and enemies change depending on which part you're in. This is actually a de-puzzled version of another map I made earlier, puzzles seem to really turn away a lot of players but I really liked the low/normal gravity dichotomy.

I revisited ideas I had for Mario Maker 1 levels in this set of courses:

Fortress of the Hammer Legion: R2L-D3Q-WLF 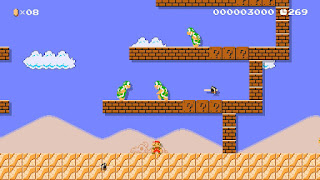 What's everyone's least favorite enemy from the original SMB? Yep, it's the Hammer Bros. Because no one asked for it, here's a level with a bunch of them. Hammer Bros in Mario Maker 2 are easier than they were in the original Super Mario Bros. in that they only throw up to two hammers in sequence, but you still must be careful with them. There are helpful powerups hidden throughout the course; I put a coin over the ? Blocks with powerups in them. If you find the Star, start running and you might be able to nearly finish the level before it runs out! 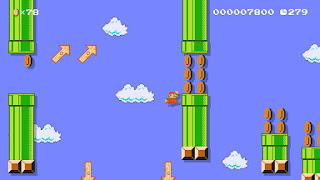 A remake of one of my favorite Mario Maker 1 courses, this is much easier than it looks. Be ready to run fast and jump far!

Check Over The Plants: 7XC-VVH-NFF 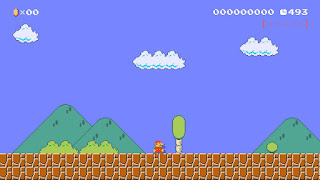 There's a locked door and Key Coins up out of reach. How to get to them? There's got to be invisible blocks somewhere, but where? Where indeed, hmm... (points to the course title)

By the way, the easiest way I've currently found to get screenshots (such as these) off of Switch, without the hassle of taking out the Micro SD card, is to post them to a special-purpose (or just little-used) Facebook or Twitter account. Then you can save them to your computer's hard drive, and from there post them to Blogger.
Posted by Rodneylives at 4:03 AM 4 comments:

There's a way to get screenshots off a Switch to include, but haven't gotten around to figuring out how to get them into Blogger yet. (The easy way to do it is tweet them with the built-in tool then link to that.)

This course is something of a sequel to the most popular SMM1 course I made, Be Careful on the Cliffs. Like it, it's mostly a fun course, not too challenging but salted a bit with enemies. It also uses my favorite graphical element, the SMB1 semisolid platform that looks like ground but "darkened," so it presents like it's inside a cave. I hope you like it! I've already got ideas for the next course....
Posted by Rodneylives at 11:55 PM No comments:

Getting back into the swing with the new system, I made a level using a lot of slopes! It's not too exciting, I understand, but I'm still getting used to the new tools. The code is 05H-PNV-M1H
Posted by Rodneylives at 6:44 PM 4 comments:

Nintendo has announced Super Mario Maker 2 for Switch, and done a whole Nintendo Direct on it unveiling a ton of new features! It looks like they've gone well beyond the call of duty for this one. There's no word if they'll update the excellent bookmark site for it, or what the fate of old levels will be. I hope they'll find a way to import levels from the first Mario Maker. The biggest thing that held back the first game was the Wii U's abysmal adoption rate; the Switch has already surpassed that and is pretty popular, so hopefully it'll end up meaning more plays and ratings for everyone!

This blog will continue to be available for Metafilter members to post their levels for the new game, although if there's no bookmark site, we might not be able to post screenshots so easily. It looks like they're still using a code system to trade levels, but they're down to just nine letters, from 16 in the original.

Thanks if you're still following us, and happy building!
Posted by Rodneylives at 4:22 PM No comments: